Over the years Talent Assessment has received huge response from its users. This response is great for us because it lets us know that we are doing our job, which is to supply a product that can benefit all types of students. Please take a look at the testimonials or success stories from satisfied educators, and if you are a satisfied customer, please take the time to share your story. 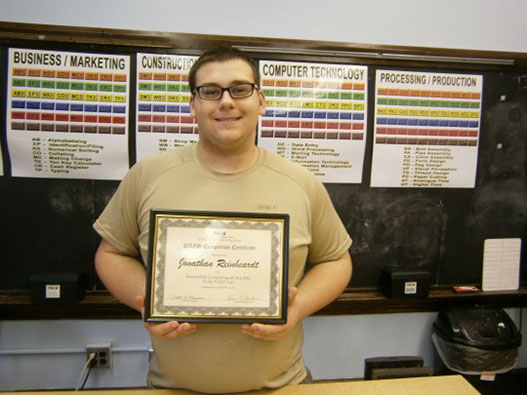 Recently, I had the pleasure of sitting down and speaking with Jonathan Reinheardt, a student, and Joe Marasco, his instructor. Joe has been running and teaching the PAES® lab for the past two years at Holy Family Chatham Day School in Pittsburgh PA.

Jonathan is a very driven 17 year old 10th grader who is on the cusp of becoming an Eagle Scout. He is also a student in the PAES® who, over the past 5 months along with doing his regular academics, has managed to successfully complete all 264 jobs in the PAES® lab - which is no small feat.

Joe tells me that every day after Jonathan finished his regular school work he would come to the PAES® lab to complete as many jobs as possible in hopes of reaching his goal of completing every job before the school year finish. I asked Jonathan what motivated him to want to complete all 264 jobs. He said it was because nobody else in his school had done it before and he wanted to be the first.  Joe said that Jonathan's dedication and enthusiasm to complete his goal was amazing, and seeing him successfully complete all the jobs was remarkable to watch. I asked Jonathan what were his favorite PAES® jobs. He replied construction and consumer, because he liked working with the tools like the EP projects and he also liked working with kitchen appliances and learning to cook. Joe chimed in saying, "he loves to cook Spaghetti O’s". He also had some least favorite jobs, which were the typing and IF units because, as Jonathan put it, "I’m not that organized". Jonathan also really liked working with the pipe fittings in the PA section. I asked Jonathan what kind of job he'd like to get when he graduates. He tells me he hopes to one day get a job in plumbing, possibly doing AC work, or another trade. Jonathan said he really wants a job where he can work with his hands and thinks the things he’s learned working in the PAES® will help him when he graduates to get a job. Joe said that they have nicknamed the pipe fitting jobs in the PA section “the Beast” because they can be quite challenging for some of his students. But, Joe said because Jonathan was so good at that section of the lab, he is able to now help other students who are struggling to understand how they work.

I asked Jonathan if he could see where other students might benefit and find it helpful in determining what type of job they would like. Jonathan thinks that the PAES® lab will help others to be successful. Now another student in the PAES® lab has been inspired to do the same as Jonathan and successfully complete all 264 jobs. Jonathan said, "the PAES® lab was a good learning process and it’s a lot of fun." Jonathan said he got to learn to make a lot of good food and the PAES® is a good way to find out how a lot of jobs work.  He went on to say it’s a good way to find out if you’re interested in certain jobs without having to go and get that job. He said that since you know what kind of jobs you like when looking for a job you can just stay away from the ones you don’t like.

Jonathan still attends the PAES® lab, however since he has completed all 264 jobs successfully he now acts as an assistant to his instructor, Mr. Joe Marasco. Joe says that since he doesn’t actually have a para-pro or an aide it’s really nice to have Jonathan there to help him out. Joe said that having the PAES® lab was really good motivation for Jonathan. "It pushed him to finish his regular academics, he knew that the more regular school work he completed meant the more time he was able to spend in the PAES® lab." Joe feels that the PAES® lab is an excellent program because it gives students hands on experience, and helps them to feel like they are involved in a real working environment. He said he really likes the fact that they themselves get to grade the level of interest that they have in each job. He likes to see how happy it makes his students when they get through certain units. He says it gives them a real sense of accomplishment when they get through jobs, especially the ones they struggle with. Joe says he’s happy to have been able to be a part of the PAES® lab, and that it’s been a wonderful undertaking for both their school and their students that are involved in the PAES® lab. He said that he thinks the students that take going to the PAES® lab seriously will truly benefit from the exposure to all the different jobs and from the experience. In closing, Joe said he really appreciates all the help and support TAI has provided for him anytime he’s needed it, he said it’s been a really good overall experience for both the school and the students.

TAI would like to once again congratulate Jonathan on successfully completing all 264 jobs in the PAES® lab. He tells me his parents are proud of his accomplishment, as are we here at TAI. TAI would also like to thank Joe and Jonathan for taking the time to speak with us, we wish you nothing but continued success.

FIND A REP / REQUEST A QUOTE

Talent Assessment, Inc. is all about helping educators find the greatest potential in all their students.  Through development tools, assessments, and transition coordination, we aim to partner with you and your students now and in their future!

Sign up for our email newsletter to stay up to date on news and events: